on January 01, 2019
Welcome to Day One of ScratchOfTheDay.net - a blog where I plan to record my scratch card wins and losses through the entirety of 2019.

I wrote all about the experiment on the page not-so-surprisingly titled 'About The Experiment', but I'll give a quicker recap here.

In 2018, I set out on a goal to play at least one scratch card a day. I ended up £191 down after 365 days and thought I'd give it another go as I believe I played it wrong from the start by purchasing long rows of the same cards from different shops rather than buy varieties of cards to mix things up.

I'm not stating that my 2019 idea is any better. It's just that I believe that I did it wrong in 2018 and thought I'd give it another go this time. 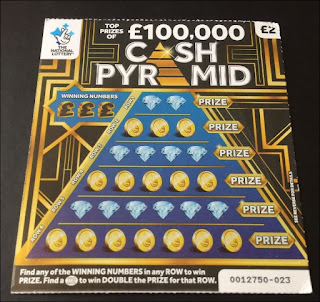 The aim of the game is to find any of the three winning numbers on the lines of the card.

Each line has a prize. If your number is scratched off, you win the prize for that line.

Oh, and there's a special 'X2' also floating around that will instantly give you double the amount that is under the prize panel of that particular line.

Line one does not have any of the numbers. It has a 9 and a sixteen.

The third line has an X2, so I have double the prize on this row. The other numbers didn't match my requirements. The 'Prize' panel will be scratched at the end.