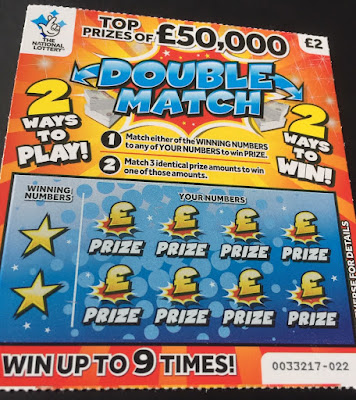 In this game, you scratch off the 'Winning Numbers' panels to reveal two numbers. Then, as per usual, you have to try and find either or both of those numbers in the section named 'Your Numbers'.

That's not all, though.

Under each number is a prize amount. Just like in regular games, if you match three of the same prize amounts, you win that amount.

It's kind of like a compound of the two popular ways of playing a game.

Here's how my game went.

It teased a few possible wins. It wasn't as fun to play as I thought it would be when I first found out about them.
£2 Double Match Scratching