As you can see in the image below, I scratched off all the main panels first before I revealed the 'Winning Number'. 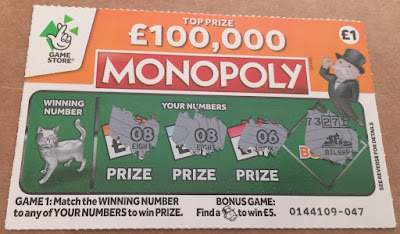 As soon as I uncovered two 08s, I knew this was going to be a win of some kind.

I had a 06 in the third panel, but thought there was a chance of catching a Monopoly Man symbol in the Bonus section.

I didn't get the winning symbol - I had a battleship instead.

Before scratching off the 'Winning Number', which I believed was going to be the 08, I took a look at the prize amounts under both of the 08 numbers.

This confirmed it to me. I was getting a 08 on the final scratch.

My instinct turned out to be accurate. I got the number I was expecting.
£1 Monopoly Scratching