I started off by scratching a £1 winning diamond in the bonus game, so the main game became a chase to find three £1s as I was either going to walk away with £1 or £2 at that point. 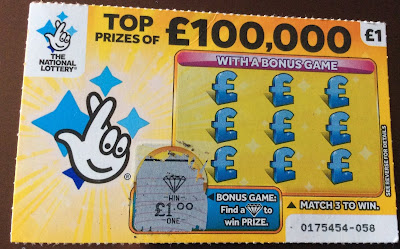 I scratched off the panels in the following order:

It was after the first two scratches that I thought it was a bad idea to have begun by uncovering the bonus symbol as I knew there was zero chance of getting a third five pound.

And so the hunt began.

I needed one more..