I started off by finding a symbol of a handbag under the Monday panel. Then, I found a DAY under Tuesday. I forgot that a DAY meant that I won the prizes under every other panel. I thought it was only what was found under that particular symbol. Anyway, I played on and then scratched off the prize below the DAY to find that it was £2.

It was here that it dawned on me that I had won what was under every other symbol, so scratched off the prize boxes below the rest and there were £2s under all of them. Therefore, I had £10 back on this card. 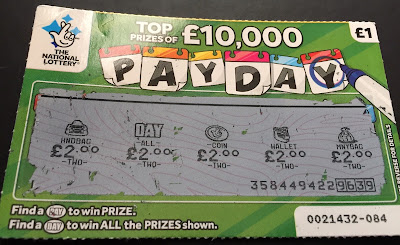