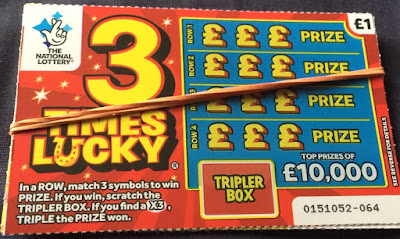 I didn't win on it. But, I had a good time playing this one.

Of the four lines on the card, three of them had the same symbols to start off with before I stumbled on the third.

In line one - I had two rainbows but then came upon a purse, the second line had two gold bars before I scratched a horseshoe under the third panel and then - in the fourth row - I found two coins before uncovering a wallet.

If I'm not going to win, I would like to lose in this way as I dislike having unmatched symbols after scratching the first two panels on a line!
£1 £10000 3 Times Lucky Scratching