The main game consists of five columns. Each column has five panels. The first panel in each column shows the 'Winning Number' for the respective column. Then, in the four panels below each winning number, the player has to match the number with the winning one. If they do, they win the prize for that particular panel.

A symbol of a moneybag could also appear along the way. The player wins whatever the prize is below the symbol.

I did not win on the main game, so tried out the three bonus games.

In all three of the bonus games, the symbol you need to find is of the National Lottery's crossed fingers logo.

The first bonus game - to win £5 - had a purse symbol. The second game was to win £10 and I found a wad of cash symbol. The final was to win £20 and I also lost here as I scratched a purse instead. 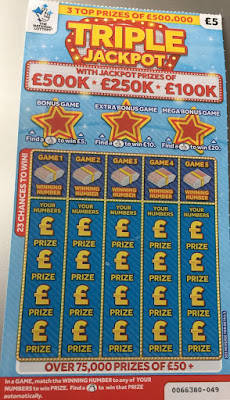 For those of you interested, here's what was under all of the panels.