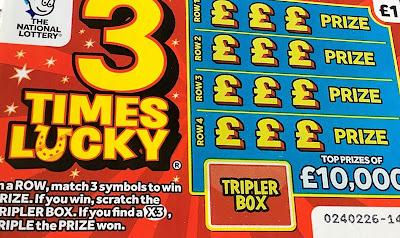 Line one had a wallet followed by a stopwatch.

The second line had two rings to start, but the run was halted when I had a four leaf clover.

Line three started with a necklace, but along came a purse.

Finally, the fourth line began with a gold bar. The second symbol was a gold bar and the third panel was... another gold bar to win the line.

I scratched off the prize panel for the row and it had £2.00 underneath. After doing that, I scratched the 'Tripler Box' to see if my £2 would become £6, but there was an X1 instead of the X3 that I needed.