It has four top prizes of £1 Million.

Here's how it looked beforehand. 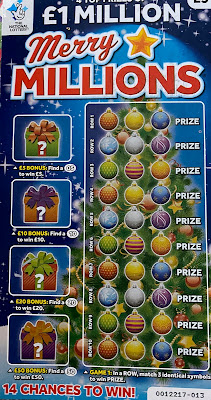 I started off by playing the bonus games on the side.

The final bonus game was for £50 and I had a 46 underneath the coating instead of the 50.

I then tried out the main game, In it, I had to find three of the same symbol in a row. I didn't win on any of these either. The closest I came was getting two Christmas Puddings in a row in the first line. This was halted by gold bars.

I then found two snowflakes in the sixth line before I uncovered holly and then - in the ninth line - I had two chests before scratching a pound sign.